Back in December 2016 I wrote THIS Good Bye to the local Lib Dems. Well since then I did what I said I was going to to do, and joined The Liberal Party.
All of a sudden the June 2017 snap general election was called, and to cust a long story short, I am now a parlimentary candidate for The Liberal Party. This is also going to add asa spring board for the 2018 local elections where I am looking forward to standing and campaigning back in my old Timperley Ward.

So to find out a bit more about the Trafford Liberal Party use THIS LINK to visit and find out more. 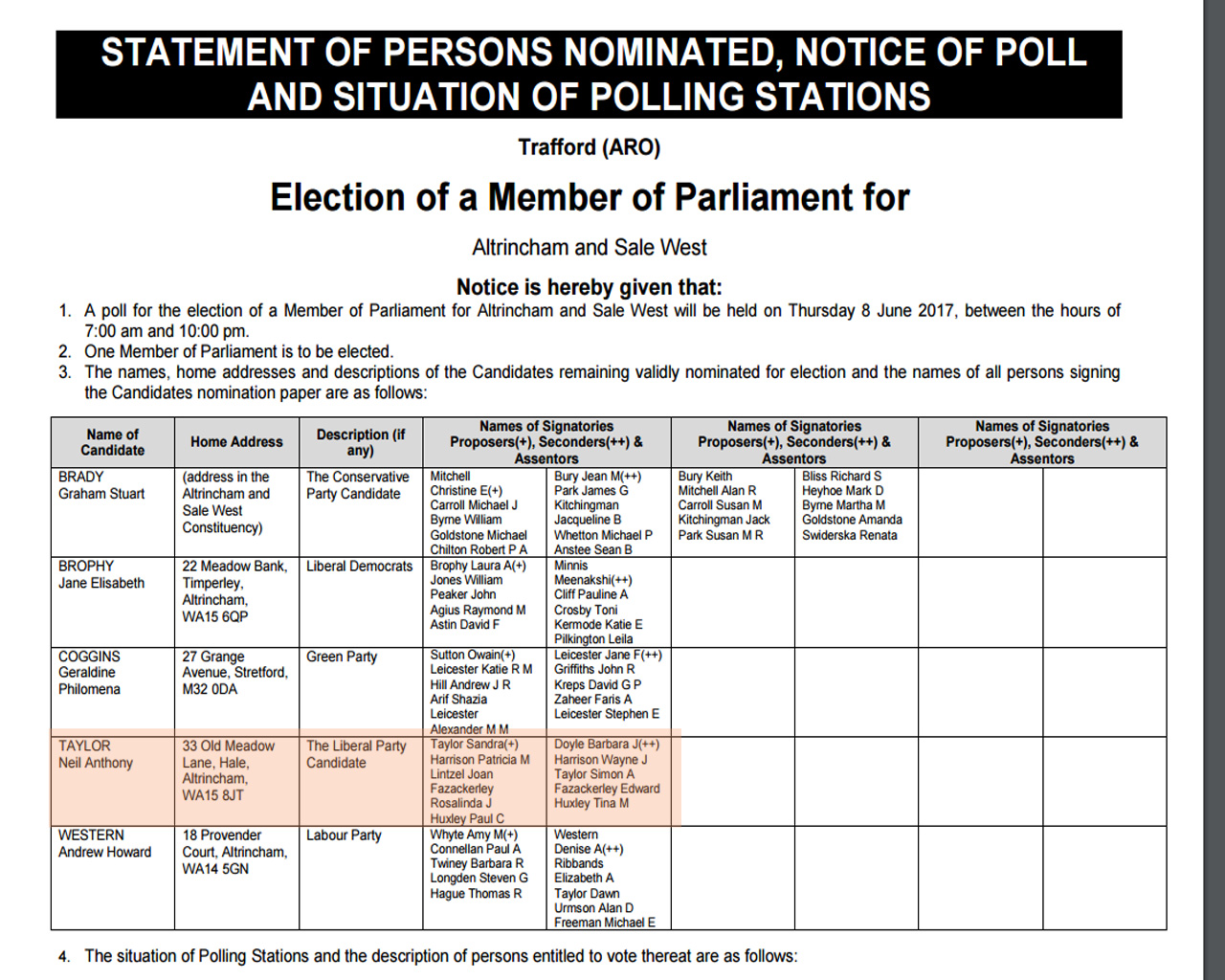 24th March 2017 you could never ever make up what happened.

FORMER Trafford councillor Neil Taylor came under fire from furious football fans on social media, after they mistook him for his namesake and Wales footballer, whose challenge had left Ireland's Seamus Coleman with a broken leg.

Welsh left back Neil Taylor's challenge has been widely condemned as reckless and many fans looked to vent their anger on Twitter.

But they inadvertently directed their vitriol towards former Liberal Democrat councillor Neil Taylor, rather than the Wales and Aston Villa defender, following the goalless World Cup qualifier between the Republic of Ireland and Wales at the Aviva stadium in Dublin on Friday.

He was inundated with of messages condemning him for the tackle and saying he should be ashamed of himself - and over the weekend the story went viral and there were more than 100,000 messages sent.

The messages started coming through as Neil and wife Sandra were enjoying a 10th wedding anniversary meal at the Hilal restaurant in Timperley.

Neil and Sandra are not football fans and at first had no idea what the messages were referring to. But when he realised, Neil responded to the messages with humour.

He said: '"My name is Neil Taylor but I do not play or like football. Tonight I went out for a curry and beer.......I have no connection with a football player called Neil Taylor."

Neil, who used to represent the Timperley ward on Trafford Council, later added: "1: I do not play football 2: I don’t even like football 3; I was in a school footie team aged about six (we lost every game)."

He even tweeted a photo of himself as a child and said: "Here is Neil Taylor when he was little. No aspiration to play football. Would grow up to enjoy curry and beer, oh and chips. "

He told Messenger: "There were threats coming through about what people would like to do to me. but I thought 'let's have some fun with this'.

"It didn't spoil the meal. I could see the funny side of it.

"But it is one of the most bizarre stories that I have ever been involved with." 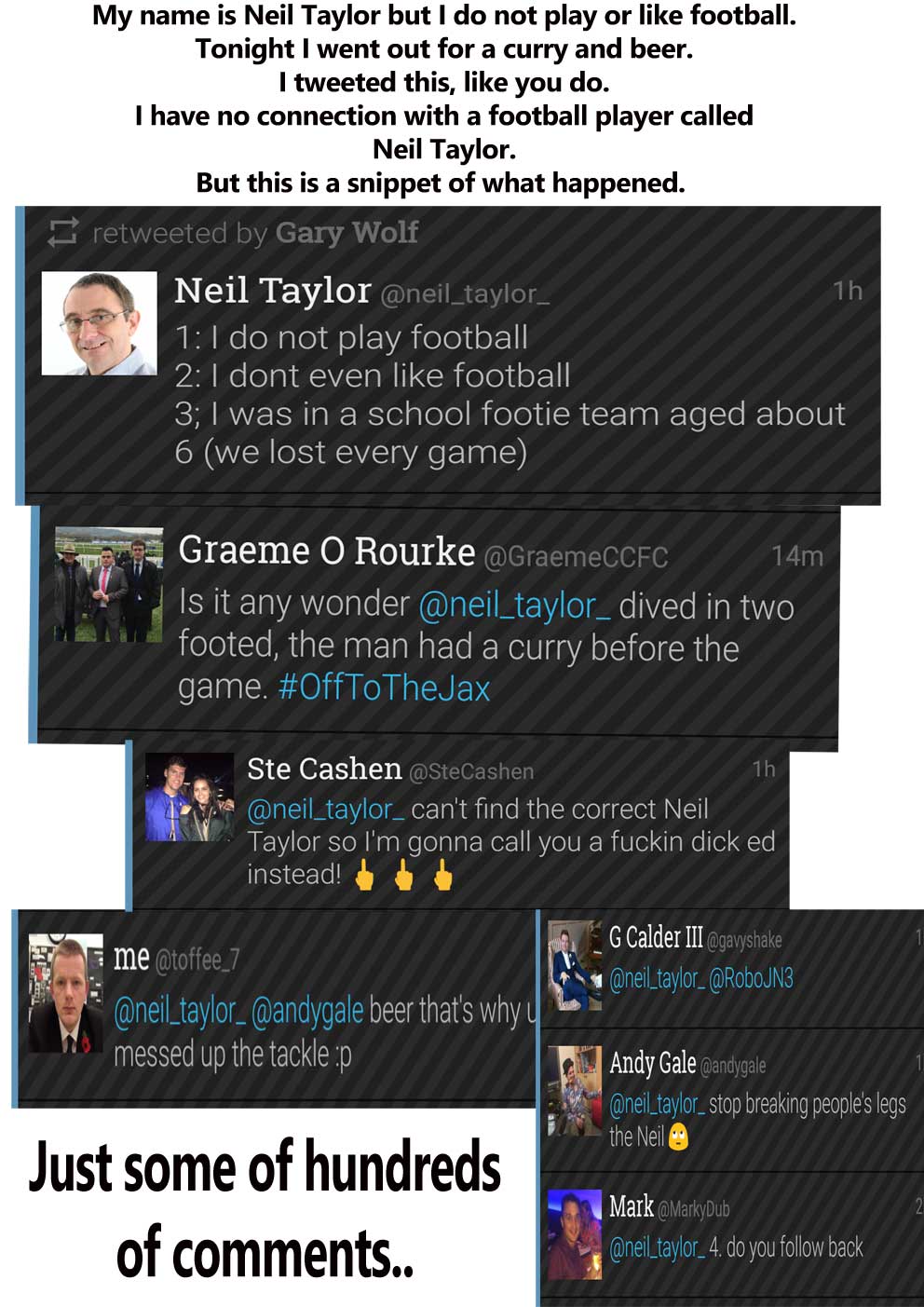 Here is a radio interview I did for BBC Radio Manchester on the story.

BBC Over To You

In March 2017 I was very lucky to be one of the 100 people chosen by BBC Radio Manchester to take part in Over To You, a week where local people would be given a chance to do tasks such as reporting, presenting, editing and more.

We had a number of training sessions, and the whole experience was really amazing. Well done to the BBC for doing this, and thank you for being one of those that took part.

Here is a "reporting" bit done with Art with a Heart , a charity in Altrincham . 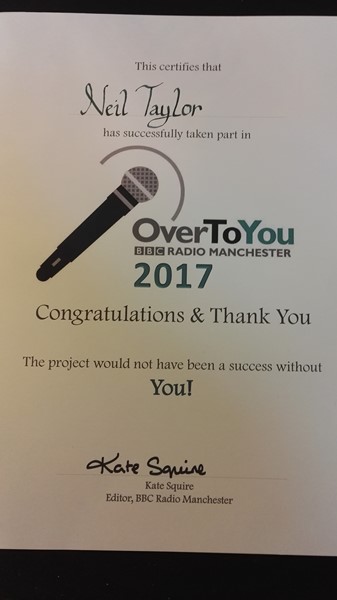 Our 2001 Ford Galaxy Zetec TD 1896cc (1.9) Diesel is up for sale.
This will be up on Ebay with a BIN £2.5k
This has just 88.5k miles on the clock and the MOT is die in May 2017
Only had four keepers since new and is very, very low millage and we have owned it since 2012.
This has been very much a family car/people carrier and has/is in used on a daily basis, and it starts first time every time, and runs like a dream.
It’s a seven seater and the rear seats can all be removed.
It has a after-market CD/MP3 player complete with remote control.