Orchestral Manoeuvres In The Dark

Orchestral Manoeuvres In The Dark

What’s all this about then?
Back in the 70’s and as a teenager, the world was full of “Disco” and “Glam Rock” but things changed, as a new evolution started to take place … An <underground> thing was going on called Punk, and while the Bay City Rollers were topping the charts, a subtle, music scene was taking place, that would pave the way for the next few decades.

So punk was born, and exciting, it was, but soon, some of the values that it stood for were to be blown away…  I was looking for something different, to touch on the electro side of things, out of the punk era many news bands started to emerge, with the< new> synth sound, of the early groups that had success was Tubeway Army AKA Gary Numan

Seeing them on tour, one of the support bands was Orchestral Manoeuvres in the Dark, with some minor air play with the likes of Electricity, and some “cult” playing from the likes of Annie Nightingale OMD did have a start…. But seeing them live was something else.

As a lifelong fan, and back in 1997 when the OMD information service came to an end, I set up a Orchestral Manoeuvres in the Dark fan web site, this was even before the band even had their own web site. My fan site just grew and grew, and became Motion and Heart it has a popular forum for fans, and in 2009 was re-created with a new look.

You can find Motion and Heart HERE and if you wish you can find our forum but following THIS LINK and now you can also find our new web site at www.omd.me.uk

On Facebook? Wow come and join the OMD Fan community I set up a thriving bustling community where everyone is welcome, please follow THIS LINK 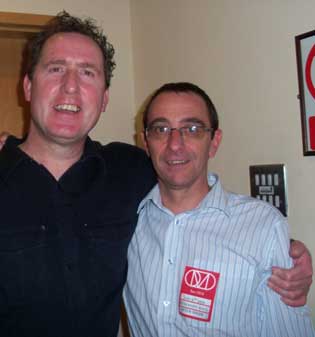 The above photo, is the only one ever taken with Andy and myself in some 30 or so years, this was taken after show (HOM tour) Birmingham 10th November 2010

I have been lucky to appear on some TV shows as a commentator re OMD (And others) some clips that I have managed to save.

Interview with Nigel Ipinson , Nigel Ipinson-Fleming who talks about Rock and Roll to Redemption.
October 2017